It is easy to get frustrated when the garden you work 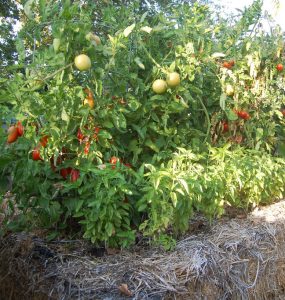 ed so hard to plant starts to show signs of disease.   Often people call our Garden Line or stop by our office telling us their garden has “blight” and they want to know what they can do.

First, it is important to determine what disease is actually impacting your plants.  What many people commonly call “blight” can be one of several fungal or bacterial diseases.

Early Blight and Septoria Leaf Spot are two common fungal diseases that can devastate tomatoes in both commercial settings and home gardens.    Early blight can also be a serious disease on other popular vegetables including eggplants, peppers, and potatoes.  Symptoms of both diseases first appear at the base of affected plants.

Late Blight is a destructive disease of tomatoes and potatoes that can kill mature plants, and make tomato fruits and potato tubers inedible.  This disease also affects, although typically to a lesser extent, eggplants and peppers, as well as related weeds such as nightshade.   This year late blight was reported in Central Wisconsin in July.

FREE LATE BLIGHT testing is available through your Extension office.   Contact us at 715-346-1316 for more information about how to submit a sample.

There is a great infograph created by Cornell University which shows pictures of the three diseases on tomatoes, you can view it by clicking here.

More information on the diseases mentioned above can be found on the UW-Madison Division of Extension Horticulture website at the links below.

For information on growing tomatoes including these and other diseases as well as insect pests can be found at the UW-Madison Division of Extension Learning store at the link below.