Jumping Worms have been Confirmed in Portage County 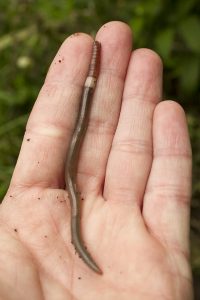 The latest invader in Portage County is the jumping worm, a destructive invasive species originally found in Madison. It has spread to 17 counties across the state since 2013. Originally from Asia, the worms are capable of causing ecological damage on land or water. It’s too soon to evaluate the damage in Wisconsin. In other parts of the country, these voracious worms are known to destroy surrounding vegetation. The worms were first found at the University of Wisconsin-Madison Arboretum. This worm is also known as the “Asian crazy worm” or “Alabama Jumper.” They act more like snakes than worms when disturbed and they can even jump into the air.

There are 20 species of earthworms in the Great Lakes region and none are native. Scientists believe that the last Ice Age killed all the native earthworms. The earthworms that people find in their gardens were introduced by European settlers. They are a friend to farmers and composters and do help to decompose organic material. However, they have a negative effect on forest restoration.

Jumping worms consume leaves and other organic materials on top of the soil faster than other worm species. They live on top of the soil and they compact the surrounding soil. There were no signs of woodland flowers in forests where the worms were found. The worms also expose the soil to erosion and do not need a mate to reproduce. Before they die, they lay eggs that overwinter in cocoons which hatch in the spring.

Identifying these worms is easy. They are darker than earthworms and the clitellum (band around the body) is white to light gray, smooth and encircles the body. In contrast, the band on your garden-variety earthworm does not encircle the body and is slightly raised. If you disturb a jumping worm it can leap as high as one foot.

You will not see these worms in the spring as they do not appear until late June or early July. You will find a second hatch in early fall. If you do come across jumping worms, report them to the Department of Natural Resources by email at dnr.wi.gov/topic/invasives.